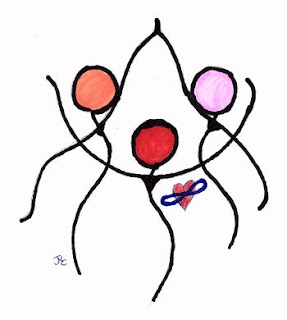 Synopsis: This mini-love-lesson introduces and discusses a newly identified emotion opposite to jealousy; it tells of couples’ experiences with it; its surprises, some of its problems, its proclaimed benefits and the growing attention being paid to it.

Learning About Love’s Many Emotions

We are starting to comprehend that love is not an emotion but does involve and manifest, not just one but many different emotions.  There are the different emotions of feeling loved, loving and lovable.  There is passion, compassion, serenity, tenderness, ebullience, protectiveness, empathy, union, kindness – and many, many others.  Increasingly, love is understood to be a powerful, natural, vital, life process more akin to great life processes like metabolism, circulation, breathing, etc. than to just feeling an emotion, even a strong emotion (see “Definition of Love Series”; “Many Good Feelings Brought on by Love”; “An Alphabet of Loves Good Feelings”).

With these understandings, we also are beginning to identify the many emotions of love and discover how they influence our health, well-being and relational life.  In the 1960s, an emotion of love was newly identified and named at the highly influential Kerista commune.  This emotion only has started to come into a broader awareness and usage, and only in some relationally-focused communities.
This newly identified emotion has always been here.  However, it seems to be rare, especially in cultures producing a lot of personal insecurity.  It is seen as an emotion which is opposite to the feeling of jealousy.  It is described as a wonderful blessing to the lives of the individuals and couples who experience it.  The name the Kerista community gave it is “compersion”.  It is pronounced sort of like the “com” in compassion, plus “Persian” as in a person from Persia.

I first professionally encountered the emotion of compersion many years ago though I did not know its name then.  While counseling a couple, they told of having unexpected, strange but extremely wonderful, love-filled feelings for one another while sexually adventuring experimentally with another couple.  They reported no jealousy, only joy at observing their own spouse having new, different and very pleasurable sex with the other couple.  They both struggled to described the feeling they mutually experienced.  One said it was like being allowed into an incredibly rare and very beautiful, very personal, intimate sharing experience with their spouse.  The other related being awestruck by seeing how their beloved was with first one and then both of the other couple.
They both further related that they felt amazingly closer and more deeply connected to one another as a couple after all four were satiated and resting.  They also were quite relieved that there was no jealousy or other bad feeling involved, as they had worried might happen.  Through their story, I was introduced to this emotion, later recognized as compersion.

This couple previously had successfully completed some couples counseling.  This time they had returned wondering if something was wrong with them for having these new, strange but wonderful and perhaps addictive pleasures.  They had entered the adventure hoping for some “hot, naughty, go wild” excitement vowing it would be just a one time only, long held, and shared fantasy-fulfilling event.

Now, they cautiously wanted to figure out if repeating the adventure with the same or other couples could be a good thing because it had been such a big, totally unexpected, good thing in their lives so far.  They also had promised each other to be reassuring and comforting of each other if either one felt insecure, threatened, jealous or anything else negative, which so far they did not.  So, they asked the question “are we crazy and is something wrong with us for feeling the way we do, or what?”.
That session ended with them agreeing to do some research on what other couples had experienced in similar situations and find out if there was reliable information about couples doing this sort of thing.  They came to the next session excitedly telling about discovering what the Buddhists call “MUDITA”, a feeling of joy in another’s joy, coming from joy being shared and experienced with someone else.  This couple also had discovered what the polyamorists were saying about the happiness of couples sexually, romantically and even maritally being involved in other love relationships.

They also had uncovered a range of problems that sometimes go wrong in such arrangements.  Then there was the potential of dangerous, sexually transmitted diseases which this couple was beginning to take more seriously.  Those discoveries led this couple to the conclusion that, for now, they had done enough adventuring and when STD’s were more medically manageable they might revisit the issue.  Until then, they would enjoy sharing their memories and creating erotic fantasies together.
Since then, I have counseled couples, throuples (see post “Throuple Love, a Worldwide Growing Way of the Future?”), polyamores and other alternate lifestyle relators who expressed having similar experiences and feelings.  Thanks mostly to the polyamore community, the word/feeling compersion and its definition, understanding, etc. is spreading.

It now is coming into wider usage to explain these feelings of joy when observing an intimate other’s sexual, romantic, even marital, joyful experience.
I think learning about loving in all its varied ways, even when unusual or different from what one is used to, can expand one’s thinking and perception of what love encompasses; this certainly has been true for me personally and professionally.

What do we need to know about the Emotion of Compersion?
This word is understood a bit differently in several different communities.  There are those who see it as unhealthy and perverse.  In others, it is argued that compersion is a proof of real, strong and healthy love.  That is because compersion is thought to reveal a person whose love surpasses jealousy, envy, insecurity, possessiveness and the cultural training to feel those things in romantic, love relationships.  Arguably, it also shows a person able to be happy for the happiness of the person they love, being happy without fear concerning the source of a heart-mates happiness.

Among poly, throuples, swingers, trans, bi and certain religious groups, there is a debated point that goes something like this:

If you and your heart partner both can observe and participate in sex with another, feel joy without jealousy or feel threatened, being insecure, angry or fearful, is that not proof of having a powerful, unconditional love for one another?  Isn’t it also evidence that you and your love mate have freed yourselves from society’s training and programming effects which often result in destructive jealousy, possessiveness, suspiciousness, mistrust, distrust and fear-based ways of seeing each other?

In its broadest usage, compersion is related to feeling love-related-joy whenever you see someone you love have happiness in their experiences with another person, irrespective of whether or not those experiences are sexual, romantic or of marital type love.

Examples can help.  Here are two:

After a counseling session, I saw an adult daughter happily introduce her mother to her father’s girlfriend.  Then all three of them went to pick up the father and go to dinner together.  It had been arranged that the girlfriend was going to spend the night with the father and mother, and that the daughter would fix breakfast for all of them the next morning.  In a follow-up session, all related that they were quite happy seeing each other be happy with each other and with the whole experience.
A husband and wife both told of how happy they were to rush home and tell each other about the dates they had just gone on with romantic others.  They took joy in each other’s date experience, often getting sexual with each other in the process, but not always.  Sometimes they were just happy for the other one’s happiness.

Compersion is related to another newly identified, similar emotion called “frubble”.  Feeling frubble means feeling joy when those you love are actively expressing their love to one another.  It may or may not be about sex, romantic love or marital type love in some communities, but in others it definitely has to do with sex or some manifestation of adult to adult love.

In certain religious circles, there are those who can relate compersion to the Buddhist emotion of mudita and/or to the ancient Greek koinonia which, as an emotion, has to do with the feeling of a joyous love unity with the Deity and simultaneously with one’s own gathered and similar feeling community of faith.

More specifically and more usually, compersion has to do with a person feeling not jealous, but love-filled joy when experiencing someone they intimately love have a happy, sexual and/or love experience with a third-party.  It definitely is an “I’m happy when I see you happy because I love you” kind of emotional experience.

Some think compersion may happen more easily in those language groups who do not have a possessive case way of talking or perhaps even thinking.  It also may be easier for those growing up in cultures with multiple person marriage systems and non-monogamous emphasizing societies.

Do You Want to Feel Compersion?

Compersion can be strongly recommended over feeling the destructive anguish of jealousy or lifeless indifference.  Of course, if feeling simple uncomplicated trust can be achieved via monogamous couple love, that also can be quite desirable.  Learning to feel compersion might save you from a painful breakup, or divorce, or a lot of horrible fights, or times of fear-filled loneliness, and depression.  Compersion also might be the only way leading to success in certain love relationships.
Compersion for many, means first battling jealousy, possessiveness, insecurity and its related low self love, suspiciousness, defensive anger, compulsion to control, tendencies to start to fight or take flight, avoid risk and conform, and a host of other problematic things.  A great deal of tolerational love (see “A Behavioral (Operational) Definition of Love”) also may be necessary.

It seems a fair number of those who come to feel compersion fairly easily, often had to fight their way there by way of lots of internal struggles.  They went back and forth between compersion and jealousy, or felt both simultaneously, as they worked to keep a primary love relationship alive and growing and with those struggles they grew a deeper, more intimate love.  Others continue, and with enough healthy, real love and loving support, may likely win their struggle.  Frequently self sabotage from a jealous and insecure, internal self is the biggest problem.  Those who succeeded are reportedly very happy about it.  Others have tried and given up but hopefully they grew and learned a lot in the process.

Paul, of the New Testament, tells us love is not jealous.  He did not tell us that love, instead of jealousy, could manifest the emotion of compersion maybe because no one knew about it or had a word for it.  However, now you do know about it and even might want to do something with that love knowledge, or not.

Wouldn’t you find it interesting and enjoyable to spread some love knowledge by talking over compersion with someone, and if you do, please mention this site and its many totally free love lessons.  Thanks.

♥ Love Success Question:  What do you think of the idea that if you have enough healthy self-love you won’t be jealous?