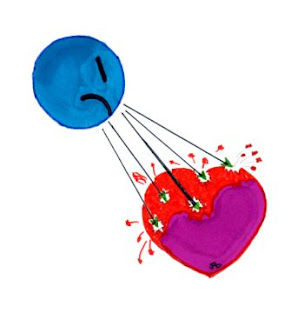 Synopsis: This mini-love-lesson starts with some important questions, goes on to 10 things to ponder about blame and then follows up with ways to reduce blame destructiveness in love relationships.

Do you get blamed a lot by people you love?  Are you a ‘blamer’ of those you love?  If blamed do you ‘counter-blame’?   Do you do a lot of self-blaming?  Were you brought up in a blaming environment?  What do you think blaming does to love relationships?  How do you feel when someone blames you – guilty, defensive, inadequate, angry, compliant, submissive, hopeless, indifferent, or what?  How often does blame lead to constructive action in your life?  Have you been in a situation where blame helped a love relationship get better?

10 Things to Ponder about Blame

How do you talk about something being wrong without blame?

Look at these different sample statements.  “That’s all your fault!” versus “I think we have to make an improvement.”  They both can be addressing the same issue but one tends to trigger defensiveness and the other may trigger corrective action.  Look at these two statements.  “You stupid idiot, how could you have done such an asinine thing!” versus “I think we have a problem that it would be good to do something about.  What do you think?”  Actually, just about everything can be said in a non-blaming way.  Blaming tends to distance people, or help them want to resist or escape from you.  If the blame is accepted the person accepting it usually is more de-powered than empowered.

What about Self Blame?

Self-blame tends to attack your confidence and bring you down.  Healthy self-love tends to do the opposite.  You can admit a mistake or see that you might make an improvement without a lot of self blame.

What To Do When You Are Blamed

One thing you might try is to say something like, “I hear blame” or better yet,  “Honey, I think I hear I’m being blamed, is that right?”  Not always do people talk more constructively and lovingly after hearing that question, but often they do.  Notice, talking this way avoids blaming someone for blaming you.  Sometimes two people in a love relationship make a contract with one another to work on taking ‘destructive blame’ out of their interactions.  Often that helps a lot.

What To Do When You Think You Just Have To Blame a Loved One?

You might try saying something like, “A part of me feels I just have to blame you for …  .  So, please, hear me out, and work with me on this so we both can get past it.”  Or you might say something like, “Let me bitch, and complain and blame you for a while so I get it out of my system.  Then love me anyway, if you can, and I’ll show you love too”.  This style shows you know you are blaming, and you take responsibility for it and want to move on to a more loving interaction.

What To Do When You Think You Are Blamed, and Maybe You Are Not

Some people heard so much blame growing up they hear it all the time now, even though that is not what is coming at them.  When you think you are blamed you might want to ask yourself, “Am I really being blamed, or is that just a complaint or is it identifying an issue and it’s not meant for me personally”.  Then after you’ve asked yourself, ask the same question of the person you think is blaming you.

Remember, how we treat others, lovingly or unlovingly, often says more about us than them.  Also, loving teamwork, done in constructive ways, usually can solve problems big and small.

As always, Go and Grow in Love

♥ Love Success Question Are you really willing to examine your own blaming tendencies, and do it lovingly as well as accurately?