Feelings Getting Hurt? Use the Hurt for Self-Love, End the Hurt! 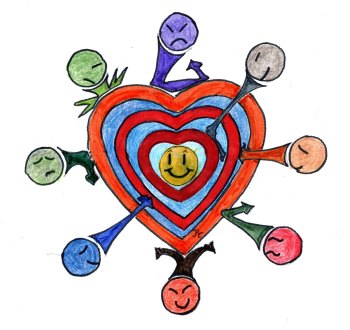 Synopsis: Explore the martial arts approach to your hurt feelings, getting upset and dealing with put-downs and criticism; See what can be learned from the barrage technique; Learn how we are taught to hurt and ways to unlearn that; and Find the way to grow your self-love as you shrink your hurt vulnerability.
In the martial arts class, each time an attacker got past an advanced student’s defensive and blocking moves, then managed to strike the student, an interesting thing happened.  The student, after getting up or rubbing a hurt spot, bowed to their attacker and thanked them for the blow that had gotten past the defending action.

Why thank the person who had just hurt you, knocked you down and maybe also embarrassed you?  Well, it is because the student' s defenses had just been shown to need improvement.  The attacker had helped the student learn exactly where that improvement was needed.  The class continued with the student going work on what they had just learned.

What has this got to do with NOT getting your emotions hurt?  Well, whoever says something to you, or about you, and you let it hurt you that is like the martial arts attacker.  An attacker has hit your psyche where it is vulnerable and needs strengthening and improvement in handling what hurt you, or emotionally knocked you down.  So, be thankful.  You can now learn how to better defend yourself instead of letting people hurt, or perhaps harm you psychologically.  That is a healthy self-love thing to do.

You may have noticed that there are some people who seldom get their feelings hurt by what others think or say about them, no matter what it is.  Many of them are not indifferent they are just better at internally defending themselves.  That probably is because their healthy self-love is strong and the self-talk that accompanies it blocks criticism, putdowns, disparagement, demeaning remarks, shaming, and the like, from reaching them.  Grow your healthy self-love and develop your positive self-talk techniques and blows aimed at you either will not reach you or, if they do, they hurt much less.  Emotionally, you are doing what the martial arts master does physically.

How do you learn not to not let put-downs, rejection, disapproval and other negatives get to you, hurt you or upset you?  First, it helps for you realize this can be done, and second that you can learn to do it, and third it is a big help in relating to others, especially in love relating.  Please study this example.

At the addictions treatment center, patients whose relapses involved being easily triggered into one of two emotional states, or both were assigned to encounter treatment groups.  One state was of anger and rage, sometimes involving physical violence.  The other state was feeling the hurt of being shamed, disrespected, looked down on, thought of as inferior or as a loser or other similar downers.

Under professional supervision, everyone in the encounter groups went through various difficult experiences.  One was to be the target of everyone's verbal abuse at least three times.  This was called the barrage encounter.  In this exercise the target person would stand in the middle of a circle of group members who are each 10 feet away.  Then the group would start shouting and screaming every abusive thing they could think of that might trigger the target person in the middle of the circle into reactions related to their relapses.   As they screamed their abusive accusations the group slowly advanced until they were but inches away from the target person.  The first time many targets would begin to cry, some would collapse and others ran from the room.  Still others would double up their fists, start screaming back and become threatening.  When that happened the group would take backward steps but keep barraging their insults and slurs at the target person.

After a time, the barrage exercise was stopped and everyone sat down in a circle. Then the group members, with great kindness, would begin to tell the target person what they previously had learned, with help, when undergoing barrage experiences.  They had learned to silently say affirmative, self-loving things to themselves, along with how to change their breathing and muscle tension while undergoing the barrage experience.  They also expressed how proud they were to have mastered their emotional reactions and how good they felt about themselves.  Furthermore, they described how they were already using what they learned and how they plan to use self-love talk when they returned to their regular life.  Sometimes the target person would practice repeating some of the words and phrases they heard from the group, to have available for the next time they went through the barrage experience.

By the third, fourth or fifth of these barrage experiences, each at least a week apart, the target person was almost always able to calmly and quietly look interested in what was being said to them, sometimes smiling and sometimes looking puzzled but never upset, hurt or angered.  In later group sessions, group members would report back on how using what they had learned had worked during visits home or times back in their regular life.  A follow-up survey showed some relapses did occur but not because of, or involving, the triggered reactions.  By the way, most groups sessions ended with a lot of thank you statements and vigorous hugs.

Some of the more silent, self-talk statements used in the barrage encounters are worth examining.  Here are some examples: "I will not give my power away to others to upset me, and especially, not to these others this time", "Today I love myself too much to let anyone down me!", “I vote myself okay, and I'm 51% of the vote on my okayness, so I win and your votes don't count as much as mine", "I know my God loves me, so why the hell should I care what you think", "I'm reminding myself that what you say to me tells me far more about you than me, and about your need to say things like that", "At my core, I know I am intrinsically worthy of love, so I choose to love myself and be independent of what you think or say", "The old me would try to hurt you right now, but the new me just lets all your shit pile up around you, and not me", "If you really meant what you are saying about me, it would mean you must need a lot more love than I do".

To learn how not to let yourself get overly hurt it helps to know some things.  One is that perhaps your culture and family have been teaching you a falsehood all your life.  That is that it is other people hurt your feelings.  There is a little truth in that but not much.  Let's see if we can prove that to you.

Suppose you get a text message that condemns you, insults you and tells you how worthless and hated you are.  You likely might get disturbed, upset, bothered or have some other negative feeling – right?  Well, not if it comes to you in a language you can't read or speak.  You are likely to just get curious, if anything.  It is not what they think or say about you, as much as it is how you interpret it or have been trained to interpret it that causes you to be upset or affected.  That is good news because your interpretation system is internal, and internal things like interpretations can be changed.  You do not have to give your power away because you've been trained to do so, but it likely will take some effort to re-train yourself.  Here is an example of how.

Suppose you have been trained to be upset if someone angrily tells you to go to hell.  Suppose you re-train yourself to think something  like “Poor person, they've got themselves all upset and want to put it on me”.  You even could add ”I think I'll give them some loving listening and see if that helps”

In learning not to be overly or easily hurt by what others say or think or even proclaim to the world about you, may not be as easy as we might be making it sound.  However, you can do it even though you may have to go up against decades of societal training which made you vulnerable to what others say and think about you.  Also, the closer and more important others are to you, especially loved ones, the harder it may be to avoid the hurt.  The hurt however, can be lessened.  If we handle the hurt well, we can use it to love them and ourselves better.

There also are people that it is important to care a lot about what they think, but not hurt too much if they say things that are difficult to hear.  It usually is pretty significant to care about what your boss thinks, not to mention the police person approaching you.  Both may have had a bad day and may be ready to treat you badly.  Deciding to treat them as well as possible may be your best act of self-love.

There's lots more to learn about healthy self-love and not letting yourself get hurt or harmed, but that will do for now.

Don't forget do talk over this mini-love-lesson with someone because that helps develop your own thinking about these issues, plus it can be fun.  If they don't know about our site, please mention it to them.

As always Go and Grow with Love

♥ Love Success Question:  If someone gets hurt by what you said, do you blame them, or yourself, or no one; and do you look for ways to make it better without any further hurt happening?