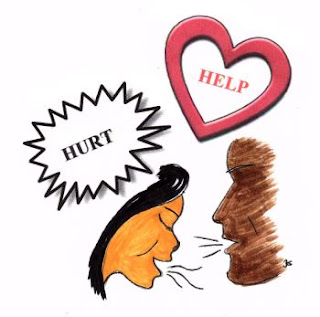 Synopsis: We start with how talking styles matter; and go on to understanding your talking style; can attracted opposites talk?; making improvements; and more.

You have a common style of talking whether you know it or not.  You actually may have several styles dependent on situations and who you are talking to.  Talking styles come in many forms or patterns of speech. They can be lively or dull, submissive, assertive or aggressive, interesting or boring and a whole host of other things.  Your talking style can greatly harm or help your love relationships and you may not even know that is happening.

A dictatorial style will usually promote passive/aggressive resistance or overt rebellion.  A submissive talking style  accidentally may reward mistreatment, and a matter-of-fact talking style can assist emotional distancing and abandonment to occur.  On the other hand, a democratic talking style assists a sharing partnership to occur, while an appreciative and affirmative talking style promotes emotional closeness and bonding.  The good news is you can improve your talking style by working on it and, thereby, improve your love relationships.


Most likely you got your main talking style from the style of verbalizations occurring around you as you grew up.  It also is likely you modeled your speech patterns to some degree on whoever subconsciously seemed to be the most effective person in that childhood environment.  Your larger environment also had a great influence.  Urban or rural, more or less educated, ethnic, nuanced or unambiguous, refined or rustic – they all could have influenced you.  And they all influenced how you have influence on others, including those you love.  Probably if you are like most people, you never have really given much thought to your style of talking (actors and announcers excepted) or how it effects those you care about.  But now let’s think about it.

Is your style of talking working for or against your own important love relationships?  Is your common or most usual way of talking seen by others as frequently insensitive, angry, dictatorial, demeaning, defensive, aggressive, generally negative or what?  If it is any of these or other ‘negative’ talking styles, it is likely to be doing more harm than good.  That especially can be true in your romantic or spouse-style loving.

Negative talking styles also can have a great influence in the love of your children, family, friends and even yourself.  On the other hand, if you usually are perceived to be talking with a mostly ‘positive’ style, that is highly likely to be helping all your love relationships flourish, grow stronger, become more resilient, be more enjoyable, more healthful and to generally prosper.  If others perceive your style of talking as commonly affirmative, friendly, sensitive, democratic, appreciative and especially loving, or in any other way generally positive, your talking style is helping your love relationships even more.

Your style of talking also can be perceived as generally neutral.  A neutral talking style may result in you being viewed as colorless, vacillating, indifferent, bland, disinterested, remote, ineffective, uninvolved, uncaring and worse.  None of these interpretations will help your love relationships’ health and well-being.


Jesse Lynn was from and very much a part of the deep southern USA where talk was often slow, graceful and gracious.  However, at times it also was honey coated, full of hidden innuendos, diplomatic carefulness and polite but demeaning and insidious commentary.  Joe was from the New York Bronx where talking styles tended to be heard as aggressive, brash, harsh, fast, full of criticism, sprinkled with abrupt discounts and punctuated by crude put-down humor.  Both Jesse Lynn and Joe were very attracted to those who seemed to be quite opposite to themselves.

On meeting each other they immediately found each other refreshingly different, then got very mutually attracted, and quickly grew ‘electrically’ enamored of one another.  To Jesse Lynn, Joe was rough, tough, and primitive making him a surefire, big, sexual turn on for her.  To Joe, Jesse Lynn was a gorgeous ‘Babe’, southern flower ready and eager for deflowering.  Both could be said to be strong candidates for a ‘Shadow Side False Love Syndrome’ involvement.

After a great deal of passion-filled months, they got to a time where soft, tender, intimate, reassuring talk would have done Jesse Lynn a world of good.  Joe sort of tried but his efforts just didn’t match what was wanted by Jesse Lynn.  Had Jesse Lynn been able to clearly ask Joe for what she exactly wanted, he probably could have done better than he did.  But trying to work with her innuendos, hints and many confusing nonverbal clues just got him frustrated and mad.  Her lack of simple clarity and his loud anger clashed and before long their relationship was over.

As is usual in these abrasive talking style altercations, they both blamed each other and found themselves to be largely innocent of any causation of the demise of their affair.  Jesse Lynn came to view Joe as a disgusting, brutish, barbarian and wondered how she could have ever been attracted to him.  Joe now saw Jesse Lynn as a cloying, saccharine, impossible and deceiving “slut/ bitch” and concluded he was lucky to be rid of her.


From the point of view of a linguistic sociometric analysis, Joe and Jesse Lynn never had a chance for a lasting love relationship.  Their talking styles were far too incompatible to handle the challenges of deeper, relational communication and the work of ongoing, real, love relating.  However, they did feel like they learned some important things, acquired some great “hot” memories and also had gotten some things out of their systems that needed to be experienced before they could go forward.  Later on, they both also figured out that just because two people use the same verbal language it does not mean they know how to adequately communicate with each other for ongoing real love.

Most couples’ talking style problems are not as clear-cut as Jesse Lynn’s and Joe’s.  However, talking style differences are thought to hamper but also to help just about every love relationship.
If you can figure out what is helpful about your talking style and what is causing some difficulty, you could make corrections and come to understand each other much better.

Everything in Franklin and Janie’s relationship got better when Franklin, a Chief Master Sergeant in the military, learned that when he came home from the base he had to remind himself he had a fine wife in a wonderful partnership marriage, and he must not keep talking in the commanding, bossy style he used all day at the base.  Every day he parks in the driveway and talks to himself for a minute about making the switch in talking styles before going into the house and greeting his wife and children.  Several times he had forgotten to do this and he started giving orders and everything got bad real fast.

Things got even better when he and Janie learned a little schema.  The schema says, with your love mate you have to know whether you are talking head-to-head (thought, logic, reasoning, etc.), heart to heart (love), gut to gut (emotions) or genitals to genitals (sexuality).  When one person is talking from one of those symbolic centers and the other person is coming from a different one, they miscommunicate.  So Franklin and Janie learned to identify and switch to talking from the same center.  Thereby, they got what people call “on the same page” much more often.

Do You Have An Improving Loving Talk Style?


It often is extremely important to develop a loving style of talk and to use it frequently throughout a love relationship.  Lots of people talk rather lovingly in the ‘courting’, early phases of a relationship and then that fades away.  Remember, love works like a nurturing food, and talking lovingly gives that food to those you love. That especially is true if someone’s best way of being loved is through talk.  So, don’t let your loved ones go love-starved or love-malnourished.

Ask yourself what characterizes your main style of talking and is it helping or hindering your love relationships?  You might want to ask loved ones for their honest answers to the same question.  You also might want to ask what is the best and the worst about the way you communicate when interacting with your loved ones.  Can you hear their answer lovingly?  After that you could follow it up with questions about what they want to hear change, add or eliminate in the way you come across.  At first they may not have answers.  In that case you can ask for feedback when they get ideas about this.  Be sure to ask for positive feedback about what they do like when talking with you.  Then use that information to make improvements.

When listening to others tell you how they hear you come across, check to see if you hear any common complaints regarding your talk style.

Here is a list of such common complaints: doesn’t listen; is always trying to tell me what to do; doesn’t care about what I think; is too judgmental, close minded, controlling, dictatorial, critical, condemning, blaming; is too authoritarian, too pollyanna; twists what I say all around; talks too long; doesn’t talk – instead lectures; makes light of what is important to me; doesn’t show feelings.
And a few more: thinks they are the only one that’s right; can’t listen without getting upset, angry; guilt trips me; all complaints and no praise; never gives compliments, appreciation or thanks; only looks for what’s wrong; is too laa laa or frou frou; too serious; can’t see other’s viewpoints; won’t allow differences of opinion; gets threatened and defensive too easily; gets hurt too easily and too often; is insensitive, bossy, wishy-washy; just doesn’t show much love .

If any of these comments get said to you, or anything even close to the above statements concerning your style of talking, know that you must be doing something right because someone is being bravely honest with you and thinks you are okay enough to hear these harsh truths.  If you do not get told any negatives, you probably are not getting the whole truth and you may need to come across more friendly and receptive.

Hopefully your self love is strong enough for you to hear negatives about your talking style, and then just go on to make improvements.  If you do not get any positives about what they like in the way you talk, ask for them.  You also might lovingly suggest they need to learn to be more balanced in their critiques.  Remember, you can use both negative and positive comments to improve.  With a negative try some changes.  With a positive work to make it even better.

Very important is not to get offensively defensive, be in denial, try to explain how they are wrong, or just feel bad about the negatives.  Another point to remember is that their evaluation may not be wholly accurate and you always have at least ‘51% of the vote’ about yourself.  Of course, if they are willing, you can ask your loved ones to hear how you hear their talking styles.  Remember to do that with love.

♥ Love Success Question
What is your guess as to what is ‘best’ and ‘worst’ about your main talking style?