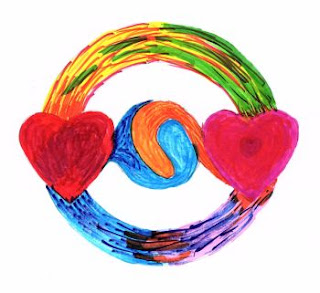 
Do you want your love relationships to last?  Couple’s love, parent-child love, family love, friendship love and even healthy self-love all become much more likely to be long lasting if you, and your love ones, become good at cycling love.  Not only that, but those who are good at love cycling are likely to enjoy more love, and get more of love’s many emotional and physical health making benefits.  Without love cycling, love relationships tend to be either puny, compared to what they might become, or they are more likely to wither and die.

Thinking about Love Cycling Takes a Different Kind of Thinking


Many people aren’t very good about thinking systemically.  They know how to think about individuals but have trouble wrapping their minds around the systems people operate in.  Here some examples to help you think this different way.  Five mediocre basketball players, who have a really good system of fine teamwork, often can defeat five star players whose teamwork system is poor.  It is the system of interacting that makes the better team, rather than individual ability.  This became abundantly clear to me when I was involved in some research that discovered psychologically healthy, okay individuals could have bad marriages, and people with certain kinds of mental health problems could have good marriages.

Coaches, of every kind of team, have to know how to think systemically about their teams, as a whole, and not just about its individuals, though that too is important.  People suffering from addictions, criminal pasts and certain kinds of mental health problems, who move back to old neighborhoods or their old family, often get sucked into the toxic system that continues to exist in those environments.   That, in turn, triggers their old problems to recur and again they become part of the old system.  Going to live in new and different living situations, with new and different interaction systems, often works far better.

Couples joint counseling and family therapy are much better at getting interaction systems to improve than is individual therapy.  Especially in couples therapy, those who cannot think and operate systemically may not improve.  Listen to Alexander.  “For the longest time I could only think, if my wife would just make a few improvements everything would become okay.  Then I decided it was only me who needed to make the changes.  But both ways of thinking, (she needs to change) (no, I need to change), never helped.  Then I learned that when one of us got unhappy it almost immediately triggered the other one into unhappiness.  It was simultaneously, therefore, both of us in a bad joint system”.

He continued with, “Our system started triggering each other’s frustration, upsetness, anger, fear and mutual defensive dysfunction.  We were, in unison, making an ever escalating, circular system which was destroying our relationship and spiraling us down into failure.

It wasn’t until we replaced that bad, old circular system with ‘love cycling’, that we together created a new system spiraling us up into the happy love we have now.  Whatever either one of us did individually to try to fix our relationship problems, did not work.  It wasn’t until both of us were trying, at the same time, and in the same way, that we worked as a cooperating team.  It wasn’t until we both jointly were using the same, better system, that things improved.  That’s what fixed us”.

Think of a football team and a ballet troupe.  If half the team are running one play and the other half is running some other play; or half a ballet troupe are dancing one dance and the other half a different dance, dysfunctional chaos and confusion will result.  In both, the team and the troupe, one half is likely to be telling the other half that they should be doing things their way, and arguing about it.  The members of the team and the troupe are all doing what they think is the right thing to do, and in fact they are right, from their own perspective.  None of them are doing anything really wrong or bad.

They can be running the play or dancing the dance they think they should be running or dancing quite well, but not in coordination with the other half of their own team or troupe.  That is what so often happens in couples and families when they are not all interacting in the same system.  No matter how well they do individually, until they are in a mutual successful system, the best they can do may not be good enough.

Now, let’s see if we can use this kind of systemic thinking to understand love cycling.

What Is Love Cycling?

After that they actually have to do what they choose to do.  The two of them, together, have then created one complete turn of a love cycle.  If person number one and two repeatedly keep operating in this receiving and sending, circular fashion, they can be said to be ‘love cycling’.  If this becomes their common way of operating and interacting, they will have created their joint, love cycling, systemic pattern of interacting with mutual interacting love.


What Are the Benefits of Love Cycling?
The existence of that circulating pattern of loving interaction, tends to have a very bonding together influence on couples.  This then frequently results in a lasting love relationship.  Not only that, but the cycle tends to wonderfully generate increasing and more powerful, growing love.  Think of an electric motor going round and round, generating more and more power.

That is how love cycling often works.  Then if a couple adds occasional doses of pleasant surprises, playful variety, exciting sexuality, comforting tenderness and the many other ways of giving love, they are, in effect, feeding each other a rich, healthy diet of nurturing love in an ongoing cycling system.  That cycling pattern is likely to keep them healthfully functioning as a couple for a very long time in spite of whatever adversities may come their way.

What Can Go Wrong


All sorts of things can get in the way of cycling love.  Here are just a few of the major ‘monkey wrenches’ that can be thrown into the love cycling machinery.  If either one of a couple thinks, or has been brought up to subconsciously think, that it is the other one’s job to take care of the love in the relationship, failure is likely.  That is like half a team expecting the other half to do all the work.  Almost as bad, is one person thinking that they themselves must do all the work.  That means they never get around to the essential teamwork of couples love.  Both partners in a couples love relationship have to communicate what they want the next ‘play’ or ‘dance’ to be, and have a way of mutually choosing a joint course of action, and then carrying it out, with each doing their part.  When one, or both, just expect the other one to know what to do, according to how they themselves think, it is likely to go awry.

Some couples are like two performers attempting to sing a duet but they are singing different songs, so all they make is noise.  Until they are using the same song, i.e. system, it is not going to work.  There are hundreds of other things that can go wrong, and about those I suggest you are going to want to read the mini-love-lessons listed in the Subject Index under the “Pain and Problems” heading at this site.  I also, egotistically but truly, highly recommend our new e-book Real Love, False Love, exclusively available at this site, and our older, but still proving to be super useful to couples, book Recovering Love.  That one is especially useful for couples who face addiction issues and is available at www.amazon.com .

What to Do Next

The next thing to do probably is start thinking about how what you do, or say, may trigger someone you love into saying, or doing, what you don’t want them to do or say.  Then also think, how you let what they say, or do, trigger you into doing things, or saying things, they do not want you to say or do.  Add to that, thinking about what you do, or say, that also triggers them into doing saying things you do like, and vice versa.  By doing that, you will begin to have some ideas about your ‘joint system’ with that person you love.  Just about every couple has both negative and positive cycling going on, but they don’t know to think of it as a ‘joint interactive system’.

After that thinking exercise, it might be very good to talk to a beloved of yours about all this, and perhaps get them to read the same things you are reading.  Then start talking about how you want to work as a team in joint, coordinated action.  There is a mini-love-lesson at this site called ‘Competitive Niceness’.  I recently heard from the couple who invented that ‘game’ (or positive interactive system).  Going toward retirement, they moved both their offices into their home, which has accelerated their competitive niceness rivalry, and made for all kinds of new, happy, loving, competitive niceness events in their life together – to the point of each trying to sneak into the kitchen first to do the dishes, to surprise the other, and other hilarious and loving behaviors. Maybe you and yours can do the same.

Hopefully this will help you have a good, starter understanding of love cycling and how to use it in your life.