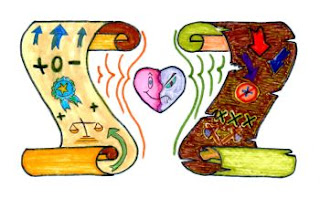 Synopsis: This mini love lesson presents attracting or repulsing speech; critiquing and criticizing differences; headed toward bonding or breaking up; and what’s coming at you.

Which of these statements will you be more likely to make to a loved one:

1. “That was really dumb of you.  How could you have been so stupid?  You never learn do you!  If you just weren’t such an idiot.”
Or 2. “I could’ve made that same mistake.  That just proves were both human and we don’t always get it right.  Do you want to figure out how to fix it on your own?  Or, do you want some help?  By the way we can use this slip-up to learn from so we can avoid this problem in the future.”

The first statement ‘puts down’ both of you psychologically and the speaker probably creates emotional distancing and probably projects a sense of the listener being alone with the problem.  In the second statement the speaker emotionally works to join with listener and to avoid giving a put down message, yet acknowledges a mistake has been made and a want to fix it. You might want to examine which of those two statements is closer to how you learned to talk growing up.  You also might want to think about the people in your life who talk more like the first statement and those who talk more like the second and what influences they might have had.

Here are a couple more statements to examine:

1. “Let’s look at what’s best and worst about what you just did.  Then let’s look at how to improve it.”
Or 2. What you just did is all crap!  There are so many things wrong with it I’m not even going to bother trying to tell you how to correct it.”

Which of these two statements would you rather receive?  Which would be more typical of the way you communicate, especially to loved ones?  The first statement has to do with the speaker and the listener together critiquing something that was done.  By acknowledging that what was done has both ‘a best’ and ‘a worst’ it offers what can be regarded as a critique instead of a criticism.

Criticism is a word with a connotation of tearing down self-concept, personally attacking, searching for and pointing out what’s wrong, and paying no attention to what might be right.  Modern dictionaries now define criticism as fault-finding, disapproving, and unfavorably evaluating.  Criticism at one time just meant analyzing with knowledge.  In some circles that definition still holds true.  Relationally ‘connotation’ often is more important than definition.

Critiquing means to examine with a view to determining something’s nature and qualities. A critique used to be defined as an act of criticism.  However, critique is coming to have the connotation of giving a balanced evaluation without likelihood of emotional dissonance.  Of course, some people can take anything badly and feel wronged by the statement, no matter what.  This is where saying things with a loving tone of voice and loving facial expressions and gestures usually helps to carry a connotation of critique instead of criticism.

Critiquing is evaluating with knowledge, hopefully without the negatives of criticism.  It’s not enough just to change your style from criticizing to critiquing, you also need to make an attitudinal change from blame to one that can be a benefit to both people in a love relationship (this includes to children, family, friends and other love relationships).

Heading toward Bonding Or Breaking up?

Being demeaning with putdowns, complaints, fault-finding, derogatory remarks, etc. is increasingly taken to mean a person is criticizing.  This is the number two reason for couple’s breakups (the number one reason is insufficiently loving) according to some research.  Criticism helps love relationships break apart. Critiquing, as a rule, helps love relationships address issues in a balanced, positive way.

There are some exceptions. There are people who have grown up thinking all positive speech is sugar-coating and only negative, critical speech can be trusted.  There is a type of masochism in which a person feels very uncomfortable hearing anything positive.  Barring things like that, critiquing works a whole lot better with loved ones than does criticism.

If you find it a lot easier talking about what’s wrong rather than what’s right with someone you supposedly love, something may be amiss in your way of going about love.. It just can be that you grew up around people programming you to talk more negative than positive.  In any case, there’s a whole lot of research saying focusing on and talking about the positive more than the negative helps you stay physically and psychologically healthy and is good for love relationships.

What’s Coming at You?

Do you hear lots of criticism coming at you?  There are several possibilities about that. One is ‘you have been programmed to filter out the positive and only hear the negative’ and you possibly may give negative interpretations to neutral and positive statements coming your way.  Another is you are encountering  too many people who would rather talk about the ‘weeds’ rather than the ‘flowers’ in everybody’s psychological garden.

Both of these possibilities can be true.  Then there is the possibility that you are way too much of a noxious influence on others and, therefore, what’s coming at you is appropriate. That too can be fixed with the help of a good counselor or therapist.  If nothing negative ever comes at you suspect that you are surrounded by people who give ‘false positives’ or everybody’s too afraid of you to give you their truth.

If you hear more critical than critiquing talk, it may be time to change some things.  Ask yourself, are the people in your life more negative or positive?  Do some really love you and, if so, do they know how to love well?  Are you unknowingly rewarding them for criticizing you and, thus, reinforcing their tendencies to do criticism more than critique?  Is your interpretation system in need of improvement?   Are you really counting the positive things that are said to you, or are you discounting them, or even not really hearing them at all?  Most important, are you figuring out what to do about these things?

If you let criticism come your way more than critiquing, it can do you and your love relationships a lot of harm.  Are you going to help your loved ones who criticize a bit too much change to a more critiquing style?  With some work, anyone can make critiquing with love a most effective and rewarding love skill.  You might want to read related topics at this site in the Subject Index under the Communication heading: “Communicating Better with Love”, “Love Complaints versus Love Requests”, “Love Positive Talking” and others.


♥ Love Success Question Which are you better at saying to yourself and others: putdowns or praises, compliments or complaints, criticizing or congratulating?