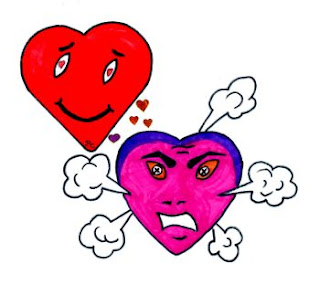 Synopsis: Hank on alert; confrontation and bafflement; a wife and sister’s explanation; preventing fighting; catharsis empathy unraveled; and the benefits are all parts of this very important love skills, mini-lesson.

Hank went on alert when he overheard his wife and sister sounding mad and nasty in the kitchen.  Cautiously he eavesdropped more.  He figured out they were not mad at each other or at him, but rather at someone else they both knew, and that brought him some relief.  As he listened he was appalled at all the putdowns and criticism they were viciously leveling at this acquaintance.  Then he heard mean-spirited sounding laughter and got anxious again.

He worried maybe this negativity he was hearing eventually would spill over onto him.  Their talk sounded unreasonably one-sided, irrational and illogical.  Hank really wished his wife and sister would be more balanced in their appraisal of this person.  Surely, the unfortunate, targeted person they were talking about wasn’t all bad and maybe even had some good traits.  Besides, being so negative and mean-spirited was bound to be bad for them too.  He wanted the women in his life to be pleasant and kind, and what they were doing sounded so sour and ungenerous.  He screwed up his courage and decided to confront them about their negativity.

Hank bravely walked into the kitchen ready to argue and cajole, but he was caught entirely off guard.  His wife saw him and lit up with a big smile saying, “Hi Hank, come join us.  Your sister and I are having a great talk.  I just love chatting with her.” Everything seemed cheerful and Hank was baffled.  Slowly he diplomatically got around to bringing up his great puzzlement over what was really going on between them.

A Wife and Sisters Explanation

Hank’s wife explained it this way, “We’re helping each other blow off steam, or maybe more accurately, we’re bonding with each other as together we vented out our toxic, bad feelings.  It helps us get clear and feel better.  It’s a lot like what you do at a football game.  You scream and holler insults at the other team or at the referee, and pretend to hate them.  In doing so you bond with your buddies there with you.  We just were doing the same thing more personally.  If anyone ‘really meant’ what they were saying when you are screaming about how awful the other team is, you’d think they were stupid or maybe crazy.”

Then Hank’s sister added, “It’s also like going to a rock concert.  You’re mostly there for the feelings brought on by instrumental music, not the ideas and information in the lyrics. You’re there sharing your emotions and your feelings, and because there’s a like-minded crowd you can do it bigger and better.”

Hank’s wife then thoughtfully added, “I just realized a lot of our fights happen when I want you to be my ‘cheerleader’, and I want to feel like you’re on my side but you start playing devil’s advocate and reasoning with me and trying to calm me down.  When that happens I feel you are not on my side, and even sometimes like you’re my enemy, and I want to get away from you and find somebody who will treat me with empathy, and feel what I feel whether I’m right or wrong.  Besides, that right or wrong stuff that has nothing to do with it”.

Hank replied, “This is a whole different way for me to think and it’s going to take me a while to wrap my mind around it.  I think you’ll have to tell me when you want me to be your cheerleader or to just listen with empathy and not try to reasoned it out.” His wife replied, “Okay, I know you get worried when I cathart, so I’ll try to remember to ask you to be my care companion and not my instructor or fixer or debater.  Thanks for hearing my point of view and being willing to try to be empathetic when I have to vent.”

What Hank ran into and misidentified can be called “catharsis empathy”.  It refers to a time in which one or more people need to vent, or let various emotions out, and have the feeling that the person they are venting with is right there with them, on their side, is joining with them without criticism, and is helping bad feelings come out.

Often when there are pent-up, negative feelings and the dam breaks to let them out, lots of things get said that make no real sense unless you understand the words just help the feelings get vented or experienced better.  It’s like when you tell your kids “It’s time to go to bed” and a kid replies “I hate you, Mommy”.  You know they don’t really hate you.  They are just venting frustration.  It’s not to be taken seriously, but instead understood with empathy.

Cathartic empathy helps people unburden themselves and at the same time helps them become bonded with one another.  When done intimately and personally, it helps us grow more love-bonded.  Receiving empathy and the ‘comradery’ feeling that comes with it while venting helps clean out psychological toxicity.  That, in turn, leads to the ability to think much more clearly afterward.  When one person wants cathartic empathy and not intelligent discourse, it useful for them to say something like Hank and his wife and sister talked about.  An example would be “I just want you to be my cheerleader ,not my coach; just hear me and feel with me, okay?”

It useful to ask loved ones “Is this one of those ‘be your caring cheerleader’ times, or is it something else?”.  Getting good at identifying such times, and showing empathy when catharsis or when any emotional expression occurs is a ‘super important’ love skill. Thousands of arguments and fights, and even breakups might be prevented by showing empathy to a catharting, venting loved one – instead of that ‘blowing off steam’ leading to destructive conflict which so often happens.

♥ Love Success Question
So, how good are you at asking for and giving empathy when emotional catharsis is needed?