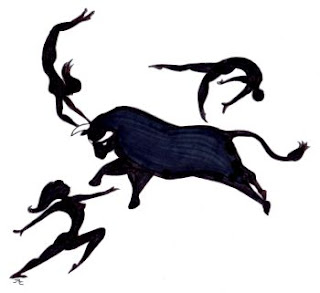 Synopsis: How to tell if you are acting more like a bull dancer, a bull wrestler or the bull when you have conflicts with loved ones, and what to do about it – with love.

When you have a dispute, quarrel, argument or fight with a loved one do you go at it more like a bull wrestler, or a bull dancer or the bull?  In ancient Rome they used to select the biggest, strongest guy they could find and put him in the arena with a bull made angry for the occasion.  The bull would charge, if the bull wrestler survived his job was to grab the bull by the horns and wrestle the bull to the ground and then break its neck.  They lost a lot of bull wrestlers that way.  On the island of Crete and later on the Iberian Peninsula they developed entirely different ways of dealing with the angry bull.  Those ways became known as bull dancing.

Today those approaches survive in what we call bull fighting, but it is not fighting at all.  It is an elegant form of dancing in which the charging bull almost always loses.  Notice how this works.  A big, powerful, scary thing tries to attack the Matador.  The Matador does not wrestle the bull, does not run away, but instead he (or she) stands his or her ground, usually doesn’t get hit, and artfully dances the big, dark, horrible, powerful, charging horned thing right by.  In the Portuguese form they do this until the bull is exhausted and gives up and, thus, the bull gets to live as well as the Matador.


So, I ask, do you go about your conflicts with loved ones more like a Roman bull wrestlers or more like an artful bull dancer, or do you behave like the charging bull?   Bull wrestlers meet their charging opponent head on, get impacted, use up their power wrestling with their opponent’s every little move, and usually get wounded if not destroyed in the process.  Remember, only spectators go home uninjured.  Those who act like the bull start roaring and charge ahead full force trying to run over, stomp and gore their opponent any way they can.  Both the bull and the bull wrestler may have a lot of recovery to do if they survive their conflict.  Also if they have any future relationship with each other it is unlikely to be a positive one.

The bull dancer lets the bull charge and expend its energy while artfully stepping aside.  In ancient Crete bull dancers evolved their art into an amusement where they gymnastically somersaulted over the charging bull, bouncing off it and expertly played with it, thereby, finessing it into harmlessness, usually ending with the bull running around in circles until it got tired.  Bull dancers and the bull consequently developed an ongoing relationship with each other in which no one was likely to get hurt and they got to have fun with each other over and over again.

You are likely to be approaching things like the bull if you see ‘red flags’ often, quickly take offense, roar (scream, yell, etc.), get yourself angrily worked up, and go on the furious attack attempting to show your loved one how they are wrong, mistaken, stupid, bad, or worse.  You are likely to be acting like the bull wrestler if you just stand there getting hit, stomped and gored as you might fight back effectively or ineffectively while becoming defensive and ending up emotionally scarred and wounded in the process.  But there are a couple of other options.  You could act like a sacrificial victim and get slaughtered, or you might attempt to run away.

You are probably acting like a finessing, artful bull dancer when you remind yourself that the anger and upsetness of the bull tells you much more about the bull and what it gets itself upset about than about you or your qualities.  You’re a good finessing bull dancer when the bull attempts to gore you with blame, stomp you with accusations, or run over you with its rapid-fire logic and you let all that just go charging past, not take it to heart or let it get you in the gut.

Good listening skills are a lot like a Matador who first uses the Cape, helping the bull get all of its negative energy out.  It’s good to remind yourself with silent, self affirming statements that while the bull is roaring at you with complaint and dissatisfaction it is sort of like the Matador standing his or her ground and doing good, mental footwork to hold on to your position and to your okayness.

You probably know that all analogies break down if you extend them too far.  Being artfully able to deal with conflict coming at you, so you can get to a place where love and reason prevails is the real goal.  Being able to get to where you and those loved ones who seem to be in conflict with you can ‘work together against the problem’ instead of against each other is the best outcome.  You may feel like destroying the bull from time to time but to do so would kill the relationship.

So, the next time a conflict with a loved one starts to happen let me suggest you consider visualizing yourself doing the artful, elegant matador’s dance whereby the horns don’t get you and the bull has a chance to calm down.  You can, with love and cleverness, learn to finesse the charging bulls in your life right past you.  Then you can demonstrate your love and perhaps both of you can get to be OK with each other.  After that, if all goes well, together you can go against whatever the real problem seems to be.  That is sort of like getting to ride the bull out of the arena.

♥ Love Success Question
Are you tending to deal with difficulties with a loved one better, the same, or worse than the people you grew up around?