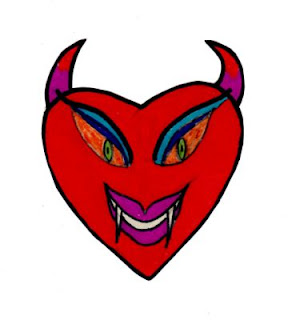 A Halloween Story of a Different Sort

Synopsis: This mini allegorical love lesson starts with the story of a Satanic problem; then goes on to the devil’s success; how Satan defeated science; hobgoblin brain scrubbing; Satan’s biggest trick; and Ends with you and the satanic forces.

Satan had a big problem.  How was he going to keep love from making everybody happy, okay, and life very good?  Then one of his little devils came up with a genius of an idea.

The little devil said,  “Let’s make everyone get love confused with sex, and sex confused with love.”  “Tell me more,” said Satan with an evil gleam in his fiery eyes.  The little devil said, “If we make the word ‘sex’ too embarrassing but the word ‘love’ an okay substitute, everybody will get to thinking about sex when they hear the word love.  Then everybody will forget about what real love means, and they will go get lost in sex, and will end up loveless and miserable.”  “Great idea,” said Satan and he sent out his minions to confuse the world, and to get everybody neglecting love and failing in their love relationships with lots of destructive conflict and unhappy consequences – just like he wanted.

Thus, it came to be that men said, “I love you” when they wanted sex.  Women said, “He loves me and tells me so, and so it’s okay to make love with him” when they couldn’t admit to themselves that they wanted sex.  Mothers and fathers came to secretly worry that if they loved their children too much it might mean something sexual, so they cut back on loving actions, and made countless children live love-hungry.

Friends would not say “I love you” to their best friends because it could be interpreted as wanting to have sex with their friends.  Consequently friends didn’t talk about their love for one another which curtailed friendship love considerably.  Lots of loving touch stopped happening because everybody thought any touch might be sexual.  Consequently, everybody became touch-deprived.  However, some people interpreted touch as being a sure sign of sexuality and that caused no end of embarrassing and shameful events to occur.  Some of these people even got arrested and hauled before judges for committing sexual harassment.

Countless couples got married because they confused lust and love and then many later divorced.  Endless books were written with the word ‘love’ in the title but they were all about sex rather than real love.  Movies and TV shows followed in the book’s footsteps so just about everybody got sex and love all mixed up with each other.

It probably started with schools of theology which stopped giving all but superficial attention to love, and turned to focusing on belief, faith and scaring people.  That was in spite of Scripture saying “love is the greatest of all”.  Pediatrics took up the idea that acting in loving ways toward your children spoiled them, and for years preached against touching, holding, rocking, cuddling, hugging and every other form of loving touch being given from parents to children.

Psychiatry came along and said “yes indeed, love really meant sex”.  Psychoanalysis added the idea that love was just a word to disguise the fact that everybody wanted to have sex with one or more of their parents.  Psychologists got into the act by studying two abnormal populations obsessed with sex – white, laboratory rats and college sophomores.  Therefore, a little attention was given to romantic love but most of the studies concentrated on sex, and almost nobody thought much about real love.

This in spite of being bawled out for avoiding love research by one of psychology’s greatest scientists, Harry Harlow, who did manage to do love research and write the incredibly influential book Learning to Love which was about monkeys, human love still being mostly ignored.  Most scientists in the life studies fields, even the human service and health fields, wanted to sound very scientific so they avoided the subject of love because it sounded too arty and like something only people over in the fuzzy thinking, humanities might talk about.

Many academics took up the idea that love was just a mechanism for procreation and survival of the fittest, or it was just too poetic or romantic or impossible to understand, or just a silly emotion or nothing but a manifestation of the mating drive, or it was too feminine or, one of the worst of a lot of bad reasons, it was too unmanly.  Yes, there were some studies with findings indicating love actions were incredibly healing to all sorts of physical and mental illnesses, and love was getting some notice in fields ranging all the way from anthropology to zoology and even in strange places like behavioral economics and psychoneuroimmunology.  Nevertheless, in the more established fields, love mostly was to be ignored except by rock singers.

Satan added to his anti-love success by propagandizing everyone into thinking that love could not be known, was too confusing to understand, was best left not understood, and if anyone really studied love it might disappear or be broken down into a lot of little, dull, boring, biological and mechanical components.  Then all of love’s mystery and magic would be robbed from us (never mind that every scientifically discovered fact leads to more and greater mysteries).

Everybody was sure that demythologizing love might happen, so no rational person dared touch subject of love with anything approaching good sense.  In essence, for a time it was totally taboo.  That brainwashing did a great job of getting the understanding of love left alone, except by artists and poets and the occasional rebel philosopher.

This worked so well that Satan’s little devils even got a US senator by the name of Proxmire to try to bar funds for love research from being granted because he was sure that if love really did exist the people of the US didn’t want to know about it.  This in spite of a 50% divorce rate, and ‘love gone wrong’ arguably being the number one reason for spousal and family member murder, child abuse, suicide, drug and alcohol relapses, and a lot more of the world’s miseries – just like Satan wanted.

Satan’s biggest trick was to have his devils convince almost everybody that although successful marriages took work, families that loved well did well, self-love was essential, and that love connects and motivates like nothing else, the little devils reinforced the idea that love must remain mysterious ‘to keep it romantic’.

Thus, keeping it unexamined and unknowable and, therefore, hiding the fact that the lack of love knowledge was a real, destructive danger.  God forbid, that we should come to know how to make love work better, grow love bigger and better, get love to be more universal, learn how to avoid love failure and cure the ailments caused by false love and love deficiency.  By all means, love must be kept romantically unknowable or people might get to live happy and okay.

You and Satanic Forces

In keeping with our little allegorical story we must ask, are you perhaps under the influence of “Satanic forces”?  More accurately, how influenced do you think you are by the cultural programming that might divert you from coming to better understand and, therefore, succeed at love?

♥ Love Success Question
Do you know a little, a fair amount, or a lot more about healthy, real love this year than you did last year, and what will your answer to this question be next year?