Is Feeling Love, Love Itself? 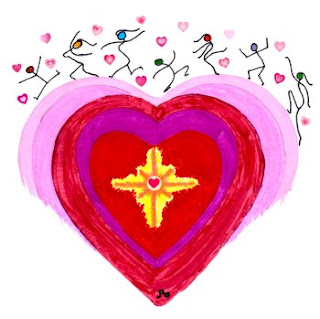 Synopsis: This mini-love-lesson starts with a review of some of the many troubling contradictions and confusions that exist about whether feeling love is a feeling or not; the lesson then posits a clarifying and for some a contentious answer to the beginning question; more.

“I’m totally baffled!  I don’t know what to believe. Most of my friends seem to think that love is an emotion but some strongly disagree. A teacher I respect says that true love is only the feeling of joyful compassion that leads to lifelong commitment and connection. One book I read said love is a wonderful emotion but like all emotions it is temporary and fading and, therefore, untrustworthy and relatively unimportant. Others say love is a mysterious, emotional power that makes the world go-round, and others suggest that feeling love is just part of the mating drive, while still to others love is just an insignificant but strong feeling you get when you play the ‘game of romance’.

I hear supposed experts saying things like love feelings lead to a parasitic, addictive dependency, best avoided or escaped. I also read love is a powerful, vital, natural, long-lasting and, once started, love is an ongoing psychoneurological process which mostly happens in the unconscious limbic system of the brain. That thought takes some contemplation. I understand that some historians suggest romantic love feelings were, in a sense, artificially invented and continued by Western world culture, starting with the French royals in the 12th century. But I also understand that animals probably feel love because their neurochemical, neurophysiological and neuro-electrical responses have been found to be the same as humans when they are behaving in ways thought to represent love occurring.

To make matters even more complicated my religion teaches me things like “God is love”, “love is everlasting”, “all true love (including couple’s love) comes from and is a manifestation of the Deity’s love”and consequently to think that love is merely an emotion, especially a temporary emotion, can be seen as sinful and heretical.” All those statements originated from a foreign graduate student, working hard to develop a cross-cultural, core understanding of this thing we call love.

So what do you think? Have you been taught, or led to believe, that feeling love is love itself? Is love an emotion? If love is an emotion is it impermanent, temporary, unstable and undependable or even fleeting and fickle? Is love only an emotion and, therefore, is not of much lasting importance?


The Perception of Love

One of the more common, perceptual mistakes people make is to confuse the perception of something internal with the thing itself. If I feel rumblings in my stomach I may be sensing  my digestive system functioning. But the sensing of it is not to be confused with digestion itself. In fact, my digestion mostly goes on without me being consciously aware of it – the natural process of love may work that way too. So, feeling love may be seen as occasionally accessing, or becoming aware of, an inner, ongoing, natural process which may always be there inside us once we truly love.

This understanding goes well with people who say things like “I know that I always love my child (children, spouse, family member or whoever they love)” but I don’t always feel that love”. It also is in accord with people who automatically and powerfully act to protect those they love in the split second of sensing that a loved one is in danger. Actions to save acquaintances and strangers tend to be much slower and less likely.  Does not the quick action to save a loved one tell us that the love is already there inside us and is ready to automatically motivate us to be protective. Also the tendency to risk one’s own life to rescue loved ones is not only far quicker but is far stronger than the tendency risk one’s own life rescuing others we do not love.

Another ‘evidence’ of love having an inner, ongoing and consistent component instead of being a fleeting and/or fading feeling can be seen in this example. John got up from a brief nap grumbling and griping about how hard it was to go to his second job. Later at that job a fellow worker asked him why he took and continued to hold this second job because it was so obvious that it was hard on John. John answered, “I do it to help pay my daughter’s college costs, and I do that simply because I dearly love her.”

Now, examine John’s statement. John is experiencing other emotions than the nice, warm, happy feelings often associated with feeling love. In fact, with his griping and grumbling he might be seen as feeling anti-love feelings. However, John’s negative feelings can be seen as somewhat shallow. Underlying them is a far deeper, pervasive, consistent and powerful process of love which keeps motivating John to do his love-motivated actions year after year.

It seems that once love is solidly established, the people who truly love always can be aware of that love; they can access it, be motivated by it and bring forth actions that demonstrate it. Sometimes this is associated with having the feelings, or emotions, that go with the word love, and sometimes not as is evidenced in John’s example above. Whether it is felt or not, it is there. There are countless millions of other examples, especially among people  who have had long-term love relationships in which hardship or strong challenge has been faced because of their ongoing love. In sickness and in health, in adversity and stress, in deprivation and defeat, love prevails as nothing else can. If love were but a temporary emotion it would not be consistently accessible and available for motivating the great and heroic acts it does, indeed, motivate.

If someone strongly and sincerely says they love you, it would seem that perhaps they have gotten in touch with a strong, natural, inner process which may continue throughout life and actually may produce a great many other emotions along with many thoughts and life-changing actions. It is reasonable to think that it takes a lot more than a mere, temporary emotion to achieve all that.

It is true that a person saying they love you may have what can be called varying and various love feelings for you, along with that love, but there is far more to love than just those feelings. Perhaps it would be more accurate to say “I am feeling loving toward you, or for you”. Perhaps it also would be accurate for someone to say “I’m feeling loved” rather than the perfunctory “I love you too” response. After a time, two people in a love relationship may have the emotion of feeling lovable. Feeling lovable, loving and loved are all probably reasonable labels for emotions that flow out of love itself. Those feelings may come and go but the love that underlies them is probably most accurately understood as stable, dependable and consistently present, not temporary.

Evidence That Love Is More Than Emotion

Another source of evidence pointing to love being something other than just emotion comes from the research into love’s physically healing effects. Along with that is the research that shows the lack of love, or the absence of behaviors that convey love, can result in failure to thrive illnesses, psychosocial dwarfism, heightened susceptibility to disease and other physiological maladies. Serious depression and anxiety conditions also are associated with people who insufficiently receive the behaviors that convey love. Then there are the amazing incidents of the presence of a loved one having healthful effects on people in deep, comatose states. There also is accumulating evidence in the brain sciences pointing to love being a deep, usually unconscious, vital, powerful, natural process.

Research in systemic and interactional variables having to do with how two or more people, or animals, interrelate and what that interrelating does to their biological functioning, also shows interesting results concerning love. Some researchers think they have evidence which suggests that two people, or two animals, who are in what can be called ‘a love bonded relationships’ sometimes exhibit very harmonious neuro-electrical and neurochemical synchronicity which apparently does not occur in non-love bonded pairs. Lovers, parents and children, brothers and sisters, twins and others are thought to also sometimes exhibit this phenomenon. Is that evidence of love at the neurophysiological level? Some people think it is. Much more research on this has yet to be done.

Research in comparative animal psychology, social psychology, anthropology, pediatric psychiatry, and even behavioral economics tends to correlate with what the brain sciences have been finding concerning love.  Behaviors that bring about ongoing, close, caring connection, nurturing, protectiveness and healthfulness are all associated with the neurochemistry that seems to be a part of love responses, and love relationships in humans and higher order primates, as well as other members of the animal kingdom.

The answer to the question “Is feeling love, love itself?” is no! The preponderance of available evidence from many sources points to love being far more than just a feeling.  It also suggests that when we feel love for someone, an animal or anything else, we actually are just becoming aware of an inner process which is natural, powerful and vital to full, healthful functioning. That process, the evidence also suggests, is something ongoing within us whether we consciously are aware of it, or not.

Therefore, it is sensible to conclude: Love is so much more than a feeling or an emotion.Feeling love is just a sensing of a much greater thing.


♥ Love Success Question
Who do you know you love, whether you feel that or not at this moment?