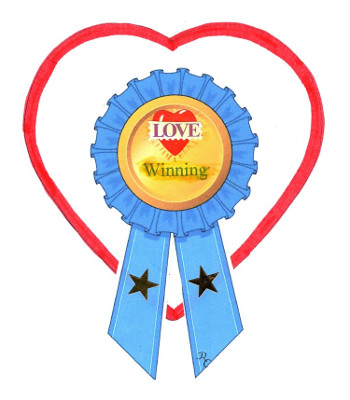 
Synopsis: Introduction to the unheralded and poorly heralded positive, world trends of adamant and compassionate love; criticism of the news media's imbalanced negativity and how you may be letting it affect you negatively; and benefiting yourself by joining those on the love causes bandwagon.

Has the news media convinced you that just about everything everywhere is getting worse and worse?  Have they gotten you used to thinking that the world's corruptions, crises and conflicts far outweigh and outnumber the advances, achievements and progress?  Have the naysayers and fear mongers got you wondering if humans largely may be a declining, mean, stupid, selfish and destructive lot with far too few exceptions?

Well take heart!  There is a preponderance of growing evidence that it is a lot better than the news media and the doom and gloom folk would have you believe.  Certainly, there are big problems and frightening challenges in abundance.  However, the good, the positive, the healthful and the improvement trends of the human condition all far outweigh the negative.  Let's glance at just some of the evidence that this is the accurate, reliable truth.

A huge collection of scientific evidence gathered from the world's leading social scientists, contemporary historians, behavioral economists and behavioral neuroscientists shows most, but not all, of the bad stuff is in decline and the good stuff is on the rise.  All long-term measurements of the world’s violence, starvation, poverty, active warfare, major crime, illness and a host of other maladies and negatives are slowly and erratically reducing.  That has been true since World War II ended.  Actually some of the worldwide reduction in negatives trends goes back to at least the early 1700s.

Of course, there are major setbacks from time to time and the data graphs show serious peaks and valleys.  However, the trend lines are all in the desired direction with only a few rare exceptions.  The evidence is mounting that the human race culturally and perhaps even biologically slowly is becoming less cruel, more kind, more empathetic, less indifferent to other’s suffering, less conflict prone, more cooperative, less selfish and more compassionate.

Just a short 300 hundred years ago we still were burning witches at the stake, crucifying heretics, hanging minor crime offenders like pickpockets and starving bread thieves, and it was okay to beat your slave to death for just about any reason.  Much more recently, circa mid to late 1800s+, over 90% of the infants placed in orphanages died of absence of love behavior treatment/failure to thrive causes, hundreds more children suffered death or became maimed in mines and factories during six days a week 14+ hour work days, it was legal for husbands to beat and rape a wife regularly, you could spend years in jail for having not paid your debts, and offending a person of royal privilege might get you publicly flogged and deported to a colony.

It is with the rise of the humanitarian revolution and various subsequent rights movements that all that began to change for the better.  Still today because of corporate greed and anti-democratic politicians, people are made ill or die, poor children are breathing and drinking pollution, government-sponsored child separation trauma is causing brain damage, the elderly are being cheated out of retirement savings, pockets of starvation and abject poverty continue to exist, the mentally ill are imprisoned rather than treated, weaponized  violent acts are common, minorities are discriminated against -- and on and on goes the list of grievances that need the champions of humanitarian and altruistic adamant love.  Nevertheless, victories are being won, new and better trends established and the human condition in area after area made better, or at least, less bad (see “Adamant Love – And How It Wins For All of Us All”).

While you can't much trust the regular media to cover the positive news very well or very much, there are a number of books, Internet sites and other sources giving more accurate and more balanced accounts on how the human race is really doing.  Steven Pinker’s book, The Better Angels of Our Nature is a great place to start.  It gives a massive array of research results, from a host of valid and reliable sources accompanied by some pretty fascinating reading.  It also can lead you to other good sources for the more positive side of things.

Do you know that a number of counselors, therapists and personal improvement coaches advise against watching much TV news.  That is because so much of that news is so negatively focused.  After watching the news, clinical reports abound telling of people becoming more depressed, more anxiety ridden, more defeatist in attitude, more afraid of going out, traveling into new areas and even just going shopping locally.

Why is so much of the news media biased toward reporting mostly the negative?  Some suggest they mostly are largely mystified and muddled about how to report the positive.  Another reason seems to be that it always has been this way in journalism.  It is almost a religious doctrine that it is bad news that sells, draws interest and captivates while good news does not.  There also is the idea that news people lag far behind in the knowledge of how to even think about the positive let alone on how to report it and make it exciting.  Bad news focus has been practiced and perfected repeatedly so that is what reporters know how to do.  It follows that reporters want crises, conflicts, crime and disasters to report on.  Without those they might not  know what to do.  The thinking is all good news days are slow news days.  For good news to make it into the headlines, it has to be spectacular, not just good, or so it seems.

Another thing is to get to the top, in the news reporters and commentators world, you have to be lucky enough to get stories of the really awful stuff first.  They want to get a scoop of the breaking (the latest tragedy, crime, crisis or conflict).  Their training is to apply as many aggression and destruction descriptive adjectives as possible.  Have you ever noticed how news givers like to talk with words like fight, hostilities, battle, combat, attack, feud, punch, hit, strike, aggression, assault, etc.  This usage especially is common when reporting about politics.

Local news programs especially are bad about mostly reporting murders, auto accidents, burning houses and other news you really cannot use in your regular life except, perhaps for getting you used to staying home and being afraid or upset.

Now, to be an appropriately informed citizen, a certain amount of ongoing news is required.  Due to the growth of fake and biased, or one-sided news, it is important to listen to opposing sources.  Also, since the world at large increasingly influences everyone's local life, world news, good and bad, is important.  Actually, there usually are some pretty positive, funny and exciting things going  on out in the world you may want to seek out and enjoy if you do not already.

If after watching or reading the news, you notice you feel vaguely or decidedly worse, cutback on the news and see if that helps.  If you notice family disagreements and all-over level of family positive interactions are diminishing, cutback on your news consumption.  If you notice a tendency to increasingly stay home and not go out into your outside world, cutback.  If you notice you more easily are angered, irritated, anxious, annoyed and frustrated, cutback.  Then as you make a news cutback, you might seek out some positive, funny and/or inspiring things on the Internet or you might talk more with upbeat friends and family.

Getting on the Love Victory Bandwagon

Love, healthy real love that is, is about highly valuing and when possible benefiting the health and well-being of the loved.  While the indicators of love winning in more and more places and ways, the enemies of love (hate, indifference, greed, bigotry, authoritarianism, cruelty, parochialism, destructive addictions, false love, proneness to violence, etc.) are all too active in our world today.  Those destructive forces work to defeat the valuing, the benefiting, the health and the well-being of the loved and potentially of the yet to be loved.  Only the perpetrators of those forces are benefiting.

Although the evidence is that love is more and more winning, the anti-love forces in the world still can win and destroy us all.  So, if you already are not, I urge you to join the forces of adamant and compassionate love.  The way you do that is to love everybody you love as well as you can and keep learning how to do that even more.  Then expand your range, if you already have not, by joining with those wonderful people involved in the many causes of love.  There are at least a 1000 of those, all with many marvelous people involved, all working to advance love-based goals, causes, efforts and movements all over the world.

That will very likely and perhaps profoundly benefit your own personal world of healthy, real love in both surprising and fulfilling ways.

One more thing:  Think about getting in a good, friendly argument with someone over whether or not love is winning in the world.  Be sure to keep it lovingly friendly and see where it leads.  If you do that, please be sure to mention this site and its many mini-love-lessons.

Email ThisBlogThis!Share to TwitterShare to FacebookShare to Pinterest
Labels: cultural