Love Does Not Insist on Its Own Way 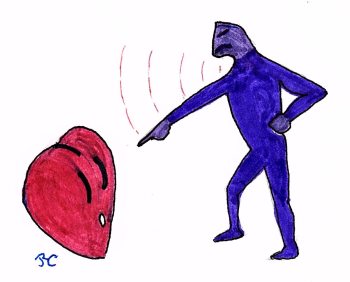 
Synopsis: A right to insistence or not; what about different translations; the real meaning of insist on its own way; and the relational psychology of insistence with systemic examples all work to broaden and deepen an understanding of Paul’s seventh item for describing love.


Note: This is the seventh in our series on a New Testament answer to the question What Is Love with additional understandings from relational psychology.


Does Love Give You the Right to Insist?

Some people believe that loving someone gives you the right to insist on a lot of things, make a lot of demands, give orders and mandate rules.  Some believe this is only true for husbands and fathers and other venerable elders.  Paul apparently saw it differently.  By this translation, Paul seems to be telling us love is not a motivator for insisting and demanding behaviors.  That seems especially true when what we are insisting on gives us some type of gain or control over someone we supposedly love.

But wait.  We have some translation problems.  The version or translation of the Scriptures you consult may read differently.

Here we are relying on the widely influential Revised Standard Version and the English Standard Version translations partly because of the enormous amount of scholarship that went into trying to accurately interpreting what Paul meant.

What Does “Insist on Its Own Way” Really Mean?

The understanding here seems to mean love does not motivate us to demand, order, mandate or dictate how those we love should think, act or feel.  The implication seems to be that our loved ones are to be treated democratically and with equanimity.  Therefore, love pushes us to take into account our loved one’s views, feelings, situations, needs and idiosyncrasies.  This necessitates developing good listening skills, seeing through others’ eyes and not being blind or unresponsive to the desires, emotions or ongoing changes occurring in or for our loved ones.  When differences or conflicts occur, working to compromise, or better yet, synthesize differences and working to have an “I win, you win nobody loses” outcome focus is what love requires.

This understanding of love also means not trying to control, predetermine, manipulate or force one’s own desired outcomes but, preferably with love, relying on requesting, trading and negotiating rather than insisting.

Insistence is related to having to be right, anxiety, insecurity, domination and sometimes dependence on sameness.  None of which are thought to be very loving.

The Relational Psychology of Insisting

Frequently insisting and demanding your own way comes across as intrusive, controlling, autocratic, stressful, selfish and unloving.  When it is seen this way, it usually causes the recipient to emotionally move away from the one doing the insisting and thereafter they tend to avoid that person.  Emotional closeness definitely can be prevented or destroyed by too much demanding and insisting.

There are a number of different interaction patterns to insisting things of a loved one.  Some people comply with what is insisted upon while secretly and increasingly becoming more and more resentful.  One result of that is to get even with retaliatory, passive/aggressive sabotage of the one doing the insisting.  Another thing that happens has to do with the suppression/explosion dynamic.  If too much insisting and demanding comes at a person for too long and they keep complying with the demands over and over suppressing their negative feelings about it, they may one day explode in anger and rage.  That has been known to lead to sudden violence and/or surprise abandonment.  Especially if alcohol and certain drugs are involved this can be quite dangerous.

One of the worst of all patterns involves an implosion syndrome.  This is one where one person is repeatedly insisting and demanding and the other surrendering and being compliant until one day they surrender to what another insists on, one too many times, and have a mental or physical breakdown.  Sometimes they even die seemingly to escape a no longer tolerable relationship situation.  It is amazing how many people suffering some form of serious, chronic illness suddenly start getting well after, one way or another, they lose their problematic spouse or they disconnect from their high stress family.

It is important to know that giving-in to demands and insistence rewards the one doing the demanding and insisting, because it works.  This, in turn, increases the likelihood of an increase in insistence behavior.  Some people mistakenly believe that their surrendering to what is insisted upon eventually will get them treated better and their life will get easier, plus they finely will be better loved.  Seldom does that happen.  Anything that works is more likely, not less likely, to be increasingly repeated.

It is very sexually exciting for some people to be in the submissive, surrendering role while their love mate is coming across as strong, domineering, demanding and insisting of much, both inside and outside the realm of the erotic.  So long as this is a game the couple plays where both agree to play with adequate safety features, and it does not develop into a total lifestyle, a couple can be healthy and okay.  However, sometimes things go too far or go on too long.  This is when an alteration from the dominance/submission pattern of behavior needs to occur without any loss of love in the relationship.  That usually takes some careful, loving work.

Another dynamic of the love relationship that has too much insisting going on is the open warfare pattern.  In this, the participants get to battle openly for who will get their way.  This battling can look really awful but actually often is healthier than more covert interaction patterns of behavior.  That probably is because it is more open and cathartic.

Some, mostly quite insecure people, enjoy being ordered around and having a lot of things demanded of them.  It offers reassuring proof to them that they and their compliance is wanted and valued.  The problem often is that the one doing the insisting seems to usually start devaluing the compliant one.  Their surrendering ways become identified as weakness.  This weakness eventually is disrespected and seen as unchallenging and boring.  The other thing that happens in this pattern is that the compliant one grows stronger and gets tired of always complying.  Breakups ensue.

All in all, being an insisting and demanding person in a love relationship usually does not work out well.  Neither does being too much of a submissive, compliant, surrendering person work out well.  That seems to be largely because, as the French Courts of Love ruled in the 1100s, love is best done by equals and not in relationships where one is dominated and the other domineering which they saw as was required to occur in marriage (of that time), and as it is best done in love relationships in our time.

Lots of people seem to get a lot out of talking-over things religious and scriptural.  Likewise, relational psychology can be pretty intriguing and fascinating for many.  So, you might use what you have just read for such a discussion.  If you do, please mention this site and all that it offers.  Thanks

Quotable Question: Is it true that the more overtly strong a person tries to appear the weaker they must covertly be?