Entropy Killing Love in Your Life? 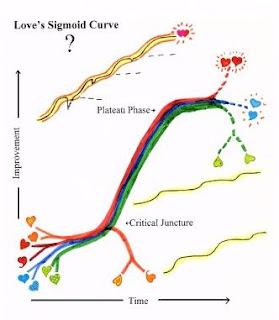 
Synopsis: First comes how entropy sneaks up and blocks vital needs for love’s thriving and surviving.  Entropy then leads to relational stagnation, then deterioration and destruction.  Next comes ways to counter entropy using nature’s sigmoid curve pattern of near universal improvement.  Jonas Salk’s works on this are then recommended.

ALERT! ALERT! Describing their couple’s problems Mike and Michelle used two of the main warning terms that can alert a couple’s counselor that their underling problem may involve – entropy.  Entropy may derail the love actions that  keep every love relationship healthy and alive.  The terms Mike and Michelle used were “growing colder” and “falling apart”.  That is what entropy causes wherever it invades – a growing colder and a falling apart.

The word entropy has widespread usage in the sciences.  This is because entropy is seen as a prevailing process in nature, discovered as occurring in a great many fields as far ranging as thermodynamics, where it was first discovered, in biology and social psychology.

In love relationships, entropy refers to social animals (including humans) in bonded relationship with each other experiencing a neuro/emotional cooling-off toward each other and a falling apart, or disorganizing deterioration of their relationship functioning.  Intriguingly, there are some indications that relational entropy may be accompanied by a biological temperature cooling and some neural network disorganization in parts of the brain associated with love relating.  However, those are just surface symptoms in the entropy process.  Relational entropy involves several deeper and much more important dynamic components.

Love Entropy in Your Life

The form of entropy that may affect love in your life is thought to work like this.  In all romantic relationships, you get attracted and then involved and a love or love-like relationship starts taking off.  At some point, this acceleration begins to level off in intensity.  Then, it may take a crash and burn dive and be over (see “Startup Love Is Never Enough !” and “What Makes Love Last?”). If the relationship continues, it goes on into a Plateau stage and this is where entropy comes into play.   Sooner or later, the Plateau phase reaches a critical juncture whereby one of two directions is taken – a slow entropic decline or accelerated improvement.

In the first half of the entropic dynamic, a slow, subtle, usually unnoticed decline starts occurring.  There seemingly safe sameness, comfort and habit start to block-out important relationship, nourishing changes which are increasingly needed.  Those blocked-out, healthy, positive changes contain the very things that keep an ongoing love relationship repeatedly revitalizing itself.  These blocks maintain sameness but result in not opening to fresh inputs, not looking for and perceiving better options, not exploring innovative improvements, not discovering refreshing life variations and not engaging in sufficient, enlivening, love-action diversity.  If some change does occur, there still may be a longing for and attempting to recapture past ways, even when the changes are beneficial.  That is the first half of the dynamic of love relational entropy.

The second half goes like this.  The above entropic process leads to relationship stagnation.  Stagnation inevitably leads to deterioration and deterioration results in eventual relational destruction.  In this entropic process, the behaviors that convey love tend to be increasingly taken for granted.  Then they reduce in frequency and potency.  This reduction in love-conveying actions starves the relationship of love interactions and their relational life-giving and sustaining function.  Without actions giving and receiving love, the love relationship does not thrive and eventually may not survive even though love feelings can still exist.

In family functioning studies, long ago it was discovered that the healthiest families and couples look the most different from year to year compared to mid-range-functioning and more dysfunctioning families and couples.  Together, the high functioning loving families and couples learn new things, go new places, do new things, interact with new people, make new friends have new adventures, engage in new ways to enjoy life including sexuality, and express their love in new as well as old ways.  They also continuously work together to improve, sophisticate and mature their ways of interacting with each other.  Most of this work is done in an enjoyable fashion though it still may be pretty bumpy during various problematic times (Timberlawn Successful Families Research Studies).

Higher functioning love relationships do tend to level off into Plateau phases but when they begin to decline a bit it is more likely to be noticed and worked on jointly.  This team work leads to a new phase of improvement acceleration where refreshing and re-invigorating change occurs.

New higher plateaus are reached and the process repeats itself in an upward, stair climbing sort of pattern of love relationship revitalization.  Crises and other problems occasionally lead to a downward spikes in relationship functioning.  With work, they usually recover and the highest plateau of functioning can be returned to.  Depending on the type and degree of difficulty, recovery may take some time.  This acceleration, leveling off on a new higher Plateau, followed by new acceleration achieving an even higher new Plateau process is what prevents and cures relational love entropy.  As couples age, the upward steps do tend to get smaller but often easier to achieve as long as health and general welfare are maintained.

Throughout the anti-entropy process, whenever emotional cooling is detected, participants jointly engage in fresh warming up love behaviors.  Whenever decline or threats to love functioning happen, more serious love relationship repair actions are taken.  Whenever signs of stagnation are revealed, conjoint plans are carried out for having new, positive experiences.

Frequently old, positive, love and life behaviors continue or occasionally are returned to but usually with a new twist or variation that helps them be both old and new at the same time.

Following the Sigmoid Curves of Life and Love Improvement

The acceleration upward, leveling off and accelerating again to a higher level pattern has been found to be an improvement pattern that exists in many things including many areas of human life and love.  It has a name.  It is called the Sigmoid Curve.  That curve has a sort of flattened out, S-shaped configuration.  It follows the pattern that airplanes taking off often follow.  They begin going down the runway faster and faster, then take off and try to travel on a steep incline upward, then level off for the long haul.  This is being looked at as perhaps a universal, natural pattern of improvement in bio-psycho-social dynamics.  This pattern of improvement can be sabotaged by the dynamics of entropy.   It is suspected that when people work with natural patterns things tend to go synchronistically better.

Together Mike and Michelle took to heart the knowledge you have just read, and went to work learning about and practicing the how-to’s of giving, getting and doing healthy, real love in new and better ways (see “Learning about Love – Together”).  They also learned to spot the beginning symptoms of entropy and to work toward upward, accelerated improvement instead of letting the destructive forces of entropy ruin their relationship.  They closely followed what they learned about using the Sigmoid Curve for love and life improvement.  If you happen to want to learn more about all this, you might want to start by reading A New Reality, Human Evolution and a Sustainable Future by Jonas and Jonathan Salk (of polio vaccine fame).  Courses and Workshops sometimes are available on the Sigmoid Curve and avoiding entropy which are applicable to just about every aspect of life via the Salk Institute.

One More Thing. Talking to others about what you just read can turn out to be exciting, stimulating, enlightening and quite fun.  So, if you do that, please mention this site as a source of knowledge about healthy, real love.  Thanks.

Quotable Question: If we only do the same old thing and don’t at least occasionally experiment with the new and different, can we become renewed, refreshed, re-enlivened or love renewed?