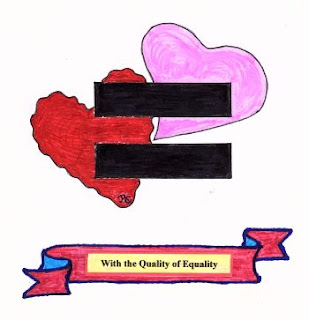 Synopsis: The values, payoffs and subtleties of treating others as uniquely different but equal, and how it is best for that to be a part of a healthy, good, love relationship is presented here with a few author’s self disclosures.

My bad!  I was so unaware until an intern of mine pointed out a flaw in the way I was treating some of my patients.  Unknowingly, mostly in group therapy and in lots of very small subtle ways, she pointed out that I was acting in ways that favored males over females.  And I thought I was so democratically equal in the treatment of everyone but she was right.  It was right there on the tapes.  I interrupted females more often than males, I nodded approvingly more often at males than females.  I dealt with the guy’s issues longer and maybe even better especially in group therapy.  And in a host of other tiny ways I did not exemplify my own value of loving equality.

Group therapy can be pretty much like a family and I was doing about the same as the family males I grew up around, and I did not want to be like them.  But there it was and so I had to go to work on me and change.  I asked my patients and other interns and they all agreed that I seemed a bit differential in favor of males.  Ouch!  I did change, and sure enough, my work with females got even better results.  I also became a lot more aware of the subtleties of treating people more lovingly by way of equality.  What a good gift that excellent intern gave me!

The Quality of Equality

I learned a lot in the poor, slum neighborhood where I spent my young childhood.  There was an old, Irish gentleman that used to singsong-speak to us kids in ditties.  Here is one that went more or less like this.


“There is so much good in the worst of us and so much bad in the best of us, it behooves the most of us to treat the rest of us with all the love that’s really there for all of us.”
(Yes, there are other versions of this but that was his version)


See if you agree with this idea.  People are so incredibly different from one another that the only sensible way of seeing them is as unique equals.  It is my contention that treating each person with the respect of an equal who is wonderfully and intriguingly different from all the rest usually tends to get the best results.  Of course, I don’t always live up to that ideal and I sometimes let my prejudice programming of old still have influence.  But now I catch myself sooner and put more energy into my personal, always growing programming of equality.

I also suspect most prejudicial disrespect is just a big “I’m okay but you’re not” psychological game.  It is likely based in an attempt to hide from one’s own personal fears of being inadequate by looking down on others instead of on oneself.

Loving others by treating them democratically and as equals, I suggest, is a superior trait in a person.  Though that is a bit of a paradox, like a lot of paradoxes it turns out to have a lot of truth in it.  This especially is important in close relationships.  Inequality treatment seldom, if ever, leads to closeness, or much of anything else that can help a love relationship.  It can lead those treated unequally to keep secrets from you, to resist what you want, to make sneaky passive-aggressive attacks on you, to secretly sabotage you and may lead to out and out rebellion.  It also can get you hated and distrusted or at least disliked.

Treating children slowly and in small steps, increasingly more and more democratically, with doses of growing equality until they are functioning as equal adults usually works well.  Children nurtured like this also tend to feel quite well love-bonded with those who treated them this way.
That is part of a larger truth.  Minorities, the disadvantaged and those with less than equal power who are treated more equally and more democratically tend to work more cooperatively and productively.  They also tend to make contributions that they otherwise might not.  The prejudicially ignored, suppressed and repressed often tend to react secretly against the prejudicial, one way or another.

Historically this likely was true of a great many of the wives of old, and currently is true for a growing number of today’s wives living in situations of inequality found all around the globe.
So, you might want to consider the question “how well are you doing at loving others by treating them as true equals who in many ways may be different i.e. unique one-of-a-kind people.  If you do a good job of that, you may be seen as a bit superior.

What Anti-Equality Prejudice Are You Programmed to Have?

In the Chicago slum neighborhood of my early childhood, it was seen as appropriate to disrespect and look down upon the people of 11 national backgrounds, 5 ethnic groups, 3 religions, 4 of 6 social classes, 4 racial groups, 3 political persuasions, those of weird sexuality, all females and sundry others.

Whatever your experience and training in being prejudiced might be, I suggest you discover it and work to eliminate it.  That will help you be more loving, lovable, happy and superior to who you were before you did so.

If you are in love with somebody and you do not treat them with democratic equality, are you loving them as well as you might?  Some might even question whether you have healthy or real love for them.  If they do not treat you with democratic equality, appreciating your unique differences, are you being well loved?  If the two of you together do not establish your relationship as one of unique equals, what will happen to your teamwork when you face the difficulties life frequently brings?

Singles as well as couples hoping for good, romantic love do well to be aware of the issues of equality involved in interacting and doing love-relating.  This especially is important for the increasing number of people getting into love relationships with people of differing social and cultural heritages.

I worked with a  lot of the singles who were frustrated and longing for more love than they had.  They did better when they changed one big factor.  They broadened their horizons, so to speak, and started mixing with new but very different groups of people than they were used to.  Some joined co-ed sports teams.  Others explored different spiritual and religious groups, still others got into the art or music of another culture.  More and different education experiences were quite helpful to many.  A lot of them got active in good causes.  With the different people they met, they risked being very friendly, assertive, and then flirting, and a bit later even seductive.

People of different cultures, nationalities, ethnicities, races, religions, political history, avocations, vocations, educational backgrounds, recreational involvements, sexualities, travel preferences and anything else they could think of that might be different from themselves were considered and explored.  The results almost always were at first discouraging but then, if they kept at it positive, good things started happening.  Many had to put away their prejudices and learn how to be enriched by the very differences they at first had thought too odd, distasteful or worse.

Purposefully putting the quality of meeting and treating new people with equality and as uniquely worthwhile paid off in the form of new adventures, new enrichments, new friendships and, yes, new romances resulted and new love grew.  Of course, it did not always go well, and even when things went well sometimes new, undreamed of problems arose.  Frequently these new romances did not fit the previously held “happily ever after/no problems dreams” of the participants but then again how many great loves do?  The good news is, real love often prevailed.

A lot of internationally mixed couples come to counseling when one of the couple insists on having a modern relationship of loving equality.  When there is a fair abundance of healthy, real love, that usually is achieved but not without work.  Overcoming a cultural heritage of gender inequality can be a very tall order but it is what more and more couples are choosing to do and to do with love.

Feeling and treating people as equals, I suggest, is a gift of self-love.  That is because it opens you up to what others have to offer which usually is quite a lot when you look for it.  It also gets you treated better by those people and by the high-quality  people who respect equality-oriented others.  Disrespect and putting others down and treating them as inferior just cuts you off from the many goodies people of diversity have to offer.

Some say, treat others as equals because it is the golden rule right thing to do.  Others say it is the charitable way to be toward those who are disadvantaged.  Still others remark, it promotes democracy and peace.  Then there is the group testifying that treating others is just practical because it works far better than not treating others with equality.  I say, yes, to all that and there is another great reason.  Treating others as equal is an excellent way to do some enriching, healthy self-love.  Embrace the differences and the people who are different and you will be enriched in ways more than you can imagine.  See everybody as a unique, multifaceted, work of art and give yourself the reward of appreciating and enjoying that creation.  It really is the self-love thing to do.

Equality As a Quality Gift of Love

Isn’t having an inner mindset or attitude that all people are to be viewed essentially as equal but intriguingly and uniquely different, a pretty fine way to think and act?  Isn’t viewing those people who are very equality-prone in the way they treat and deal with others, something you can admire and respect?  Isn’t striving to be more like them a worthy goal and one you will feel good about achieving?  If you become good or better at the skill of treating your loved ones with the quality of equality, might not everybody benefit?  Won’t each of your love relationships, including the one with yourself, flow smoother and grow stronger by way of relating in equality as opposed to inequality?

How about you tell somebody about this mini-love-lesson and this site so you help spread knowledge about love and so you have somebody new to talk all this over with.